A translation of Ranko’s blog post in the fanclub, more specifically the part where she talks about the lyrics she wrote for Daihinmin and Majotachi no Ongakushitsu. I’ll probably revise them once I get the albums!

First of all, here is the first release.

Track 2 “Sono Saki no Oku”
The Grimoire of Alice is the original theme, so I thought about PC-98 Alice, the so-called Lolice.
When she lost and re-appeared as EX boss, she fought with the ultimate magic, but despite that she still lost, isn’t that really frustating? I thought, and since the Alice in PCB doesn’t seem to be a different person (and because I’m one of those who link PC-98 to Windows), I wonder if she abandoned everything, changed just about everything and came to Gensokyo for the sake of victory at any rate~. Actually, I’m jealous of Alice’s fighting spirit~.
Those were the lyrics.

Track 4 “Yozakura Hanami”
Magus Night is the original theme, so the lyrics are about Cirno and Marisa.
When I wrote the lyrics for “Revoleader Align”, which has the same original theme, I thought about depicting the seriousness in the middle of the battle, so I wanted to write in a different shape this time.
After Fairy Wars, Marisa and Cirno played danmaku many times under the night cherry blossom, but since Marisa is a human and eventually she will become old, I wonder if the day she will lose to Cirno will come.
Among the fairies and youkais who grasp Marisa’s hand at her sickbed, Cirno became one that she recognizes as a strong enemy, as I wrote. No matter how many times I reflect upon this, there is a dream in a story about the lifespan of different species.

Track 7 “Sukoshi Mukashi no Ohanashi”
Since the original theme is Majotachi no Butoukai, this is a story about PC-98 Marisa, or better, Seihou Marisa.
I interpret it to be in the same time axis of PC-98, so I wonder if she has Marisa’s personality, or rather Malisa~, I wonder if she grew wings because she was a demon~ I wonder if there is anything related to possibly being Mima-sama’s child~; I imagined this and I wrote the first part, and from there the second part is the Windows version.
The danmaku rule was made and she was having fun with this, but on certain occasions she is on the point to show herself as demon. She doesn’t want to fight with real magic or hurt people.
The lyrics were done at the end of terrible falsehood and delusions, as she sealed it because she wants to pretend that part of herself doesn’t exist. Marisa-chan is made of dreams and sweets.

Track 10 “outcast”
It’s a song about that person whose name has not been heard recently. No, will Mima-sama really come back? (・ω・`)
When I wrote lyrics for the previous arrange of the same theme, it was a song about a poor Mima-sama who wasn’t recognized by Marisa, but this time it doesn’t have a sad feeling, it’s refreshing. It’s a song about going on a trip without being noticed by anybody.
I wonder how those who stopped the moon came back to normal… That’s very interesting… Mima-sama… 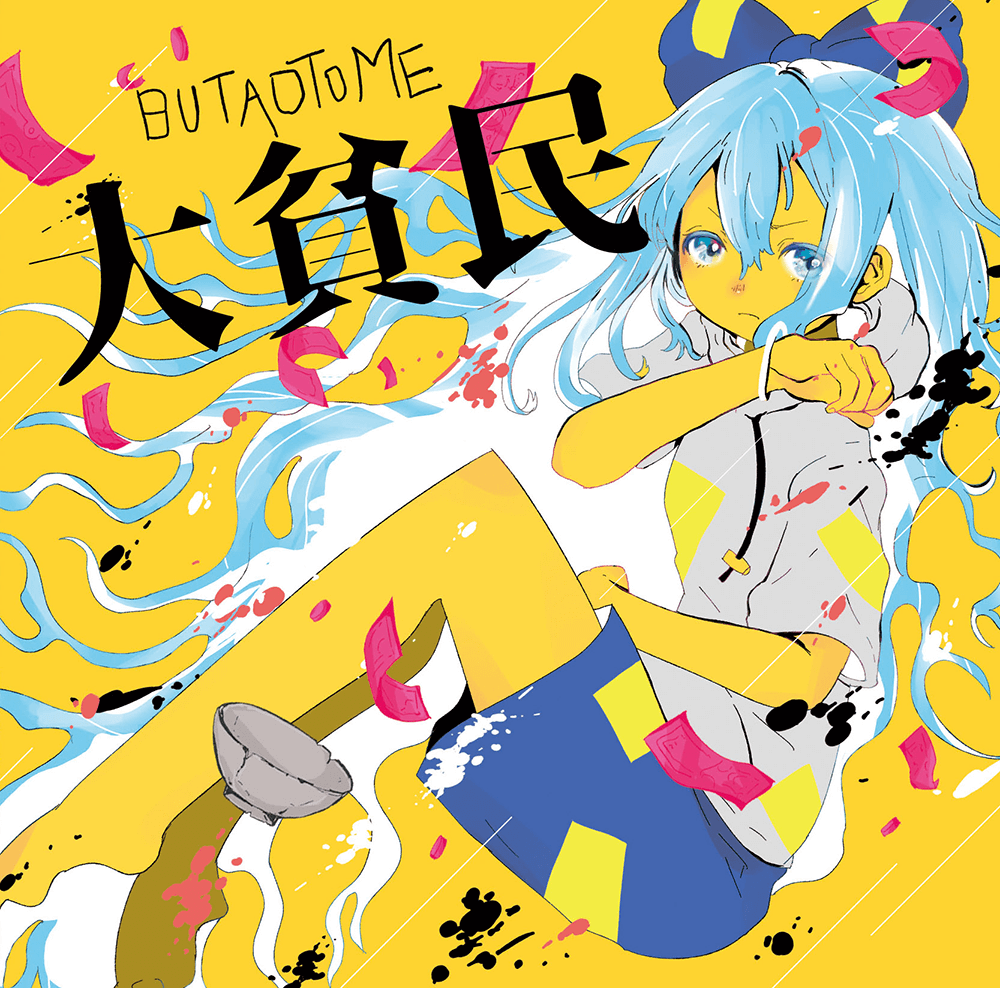 Track 2 “Kamitsu Setai Messiah”
It’s an arrange of Chi no Iro wa Kiiro and Red and White.
I got the lyrics idea from my sis “it would be nice to have a shrine song” and so, I thought every time an incident is solved, the number of people at the shrine will increase… given this, I wrote a Reimu song.
Actually, I have an headcanon that the shrine has been always filled with youkai even during the generations before Reimu. But it’s eternally poor.

Track 3 “In The Black”
Being an arrange of Fukamidori no Tanukimori nite, I wrote it with the MIB attribute that has been recently added to Mamizou. …but, the MIB (I never watched the movies) will erase my memories~ if I see aliens~; from there, I tried to connect it to the story of Cthulhu Mythos, which I’m recently into. That has a lot of alien creatures named gods.
In Cthulhu, if you see those creatures, you lose SAN points (something like sanity) and you go crazy in a certain period of time if you lose a certain value.
“I saw alien things I should have not see, but now the Men In Black will come to erase my memories, wait those were the gods of Cthulhu Mythos, they can’t erase my memories~ Oh noes~” they say this as they completely fall into madness; that’s the song.

Track 4 “Kurukuru Tsukai”
It’s an arrange of Eien ni Tsudzuku Kairou and Invisible Full Moon.
I’ve heard that Udonge’s urban legend in ULiL is the Kunekune and I wanted to write that kind of lyrics, but I don’t really trust Udonge’s sanity, and inevitably these fellas might go crazy all the time… I thought, and these are the lyrics
There is that kind of thing relating to Teruyo, but I guess for Udonge it’s even more wicked.
They say “it’s easy to pretend to be mad”, but that’s because they are really mad.

Track 5 “Tomodachi wa Mizu no Naka”
It’s a Candid Friend arrange.
Nessie is Nitori’s urban legend in ULiL and this is an idea I got from my sis as well. This is a song from Nessie’s viewpoint.
It’s born from humans’ talks and delusion, but as time passed it was forgotten and went to Gensokyo: it became very lonely, but since there is Nitori, I guess it’s fine.
While I was writing, I felt a lot of emphaty towards Nessie and I came to think it was very cute.

That’s it.
I was glad to write various types of lyrics this time!

Some translation notes:
– In Touhou 2, Marisa’s name is written as 魔梨沙, with a different kanji for the “ri”. This name is generally used to refer to the red-haired Marisa who exclusively appeared in that game (but I’m not sure if Japanese fans also use it for PC-98 Marisa in general). Malisa is an attempt to preserve the thing in translation.
– In PoDD, Mima’s wish at the end of her story mode is to stop the moon, so that it would have been night forever.
– when Ranko talks about Cthulhu and sanity points, she is referring to a TRPG. She also recently tweeted about it.