I’m terribly sorry for the late, but welcome back to the usual review corner!

First of all, let me admit something: for the first time I felt not that excited for a BUTAOTOME album. Excluding a couple of tracks, the crossfade gave me a meh impression, as if I was listening a bunch of generic Melonbooks/Toranoana songs put together to form an album. Even my Piggy friends agreed that it was not really exciting.
However, I still love those four crazy guys and there’s no way I would skip a release (unless following certain rules), so I preordered it as usual. Plus, remember that XFDs are freaking lies, and my hype rised after listening the full version of a track I’ll talk about later.

I got my copy this Monday, thanks to the usual proxy service! I would have got it on Saturday, but at least in my town they never consign stuff during weekend. 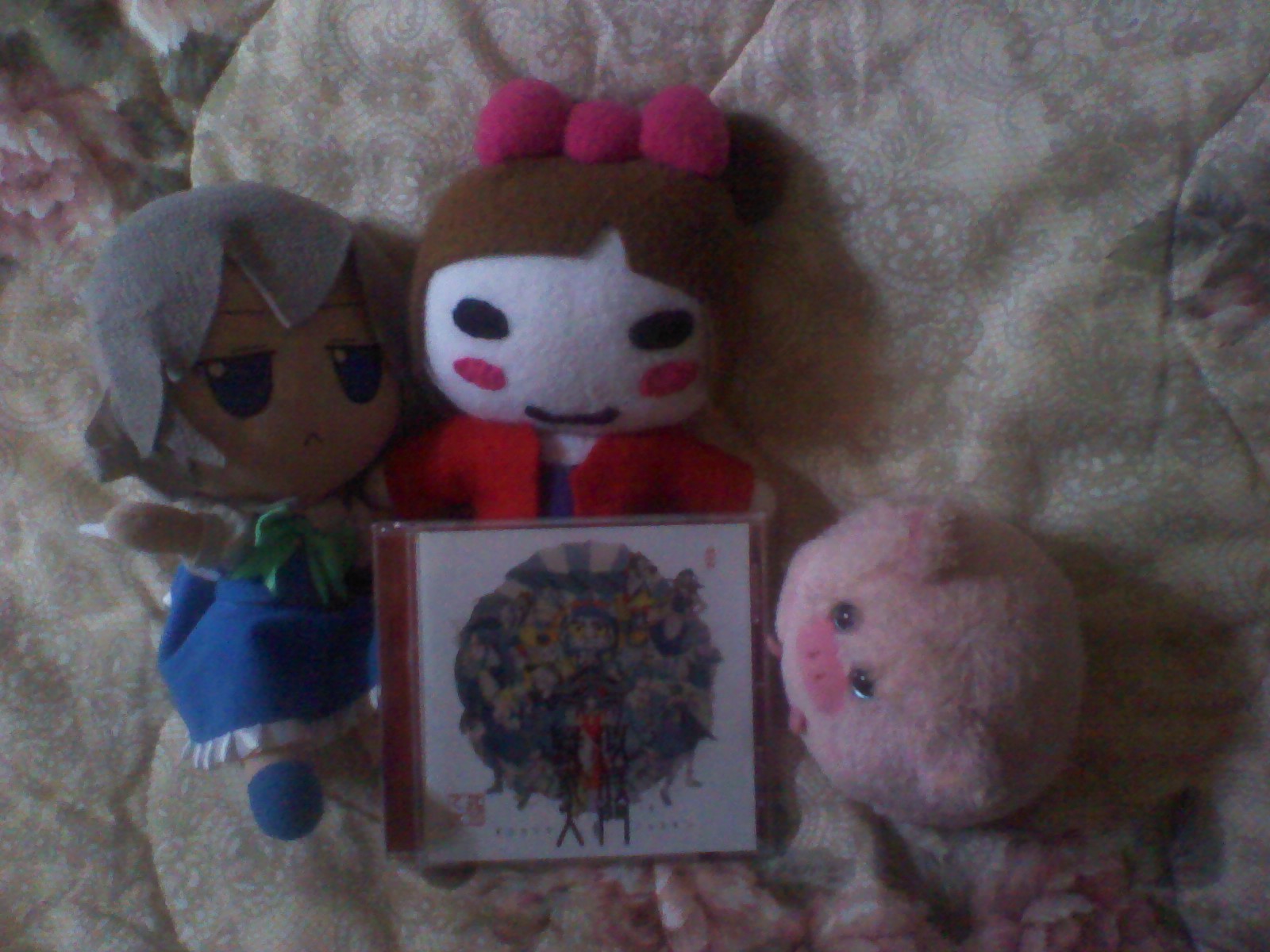 The booklet has a simple designs, its pages are white with details/writings on the yellow/blue tones of the cover and they contrast with the red of the inlay. Also, there are romanized titles!
By the way, Comp likes the cover art so much that he would like to make goods related to it. I think it would suit a t-shirt, or also a big mug…

Now, before starting the track by track, let me write a comment about the album: I can’t help but feeling it as a sort of “sequel” to Kyou ga Saigo no Ichinichi. The two albums are different speaking of the musical style, but they share some points in common: similar themes (the memories of the humans vs the growth of the girls), Comp writing all the lyrics and a particular presence of Reimu and Marisa. As you might already know, ReiMari is one of the recurring elements of BUTAOTOME’s Touhou world. While they don’t spam those two in an obsessive way, the red miko and the black witch pop up from time to time and the fact Ranko is an enthusiastic ReiMari shipper also helps.

1. Nikoichi
If Aru Haru no Hi was “the opening theme of a ReiMari anime”, this would be the second opening.
This song simply opens the album in a kickass way, and it’s also my favourite among Comp’s tracks this time!

2. Chuudou Hokou
Continuing the mood set off by the previous track, here we have a new Reimu song. I read some Japanese comments that compared it with Kyou En and I can hear the similarities. Now it needs a Shaft-esque PV. Ok, no.

3. Tsubureru Riyuu
Surprisingly, this ended up being my favourite track of the album. I really love the piano play here and can’t help but singing along while listening. The lyrics are also written entirely in hiragana, which denotes childness, emphatized by Ranko’s singing tone.

4. Futari dake no Kotoba
From the XFD, I was expecting it to be a clone of Shuushin, track in the Kashiramoji exclusive CD. But the full version turned out to be better than expected and have a different mood; it’s still a really good track! Being Shuushin a live-exclusive song, I guess there is no problem for the majority of people. Ah, it ends with Ranko singing lalalala.

5. Chiguhagu na Housoku
A pretty much standard Papu track, but with a bright mood, chirping sounds and use of Chinese instruments!

6. Sorairo Ribbon
Alice in Wonderland is my second favourite Touhou theme, so this was one of the tracks I looked forward the most! The way the theme has been arranged is similar to Hakike ga suru hodo gesu na yume, Butaotome’s previous take of the theme and it quite feels like a “2017 version” of that song but the not-original-theme parts are different, plus Hakike ga is a compilation song and only hardcore fans care about those. Oh, and that bass!

7.Toge
More (ran)Koishi stuff. The two Koishi songs in this album are way less “strong” compared with the other Comp-only tracks. This one also features an harpsicord (or what it sounds like) in the end. Makes me think about a garden of roses for some reasons.

8. Shunshuu
Title/ending/credits themes of Touhou games are not exactly a common pick for arrangers, and it’s rare for BUTAOTOME to arrange them. However, DDC’s title theme seems quite popular, mainly for its nice melody and for not sounding entirely like another clone of Theme of Eastern Story. Coming back to this song, it’s a ballad, and the Pig never goes wrong with ballads! A part of its lyrics is also in the obi of the album, so maybe this could be considered as the “key” track of the album? It’s also somehow similar to Mou nani mo hoka ni iranai hazu sa, ending the album in the same tones.

Overall, it’s good, not one of Butaotome’s best works, but it’s also far from being one of their worst. Pretty much a “medium” disc, and it’s also better than what I expected from the XFD. Let’s see which other Touhou releases this year will bring to us! With the new Touhou games, I’m expecting something very interesting.

Bonus
Sorry, but I really want to talk about this track! Basically, it happened that during the Super Livebox streaming, they streamed the entire first disc of the newest Partybox compilation in between the breaks. So, I’ve already listened Yokubou no Kodzuki, the new song made for that compilation! But no second disc, so no acoustic Rougetsu for me, at the moment. Anyway, this is the song I talked about in the intro: it’s pretty much standard, but I think it would be also fun to hear live! And if you wanted a (proper) Little Princess arrange by Butaotome, this one will satisfy you. But the best thing about this track are those HEY/ choruses in the first verses. I swear, when/if I’ll get the lyrics for this track and the HEY/s are not there, I’ll add them in the romaji.