Finally I can post this review!! This time I asked my friend Jaefine to buy the albums for me, directly at Comiket.
– Pros: she kindly ripped them for me so I listened them at release date, I also got some event-limited stuff, mostly important the fan so now I can fight heat with the power of BUTAOTOME!!111oneoneone
– Cons: the shipping costs were going to be much more expensive than usual, so I picked a more economical and slower option and this review has been delayed until now. 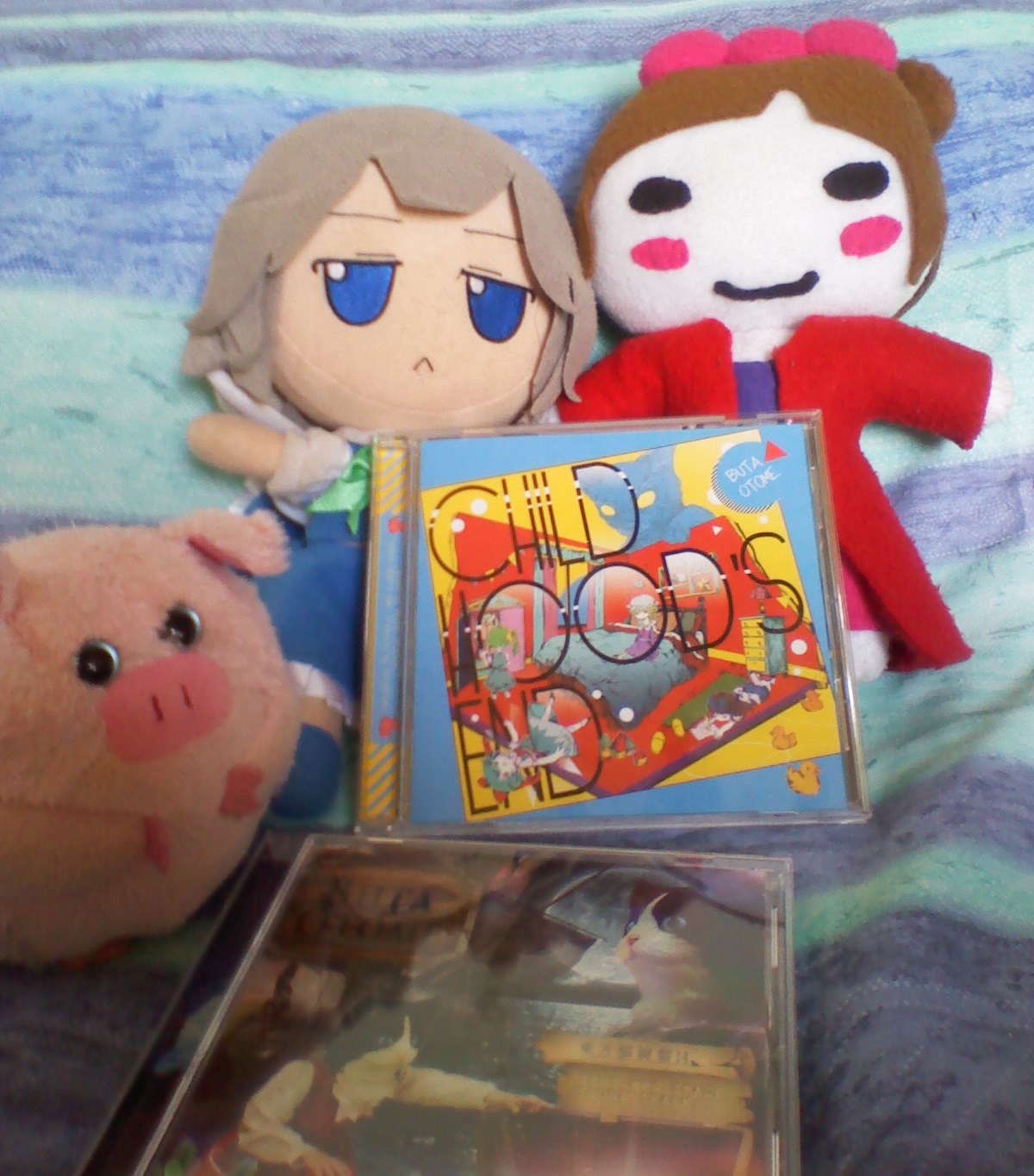 If you read the Giji Kazoku Nyuumon’s review, you might remember how I found that album to be a sort of sequel of Kyou ga Saigo no Ichinichi. I have a similar feeling for this one as well, but it’s not that strong: the theme this time is basically the album title (and quoting the album inlay: “Don’t grow up. It’s a trap.”), Comp wrote all the lyrics, but this time there is no ReiMari.

Design-wise, yellow and light blue are the predominant colors, the cover image is very cute and the back arts feature the clothes of every character featured in the album (Kosuzu has only her shoes, but there are also Letty’s clothes because of Aoi Miren, I suppose). Some of them are also inside the booklet, which is also in vertical (like FREAKS) and features romanized titles once again!

This album has several misprints:
1. the omission of “chillax ver” on Aoi Miren, Aoi Namida. (reported on the official site)
2. the omission of “Year-Round Absorbed Curiosity” in the original source for Mizuiro Hanabi. (added on the official website once I told it to the Sis)
3. a misprint of Shitataru Shiru’s lyrics, with a wrong stanza placed on the final one. Nothing too serious compared with certain other past lyrics misprint. (reported by Comp on Twitter)

1. Inishie
I dislike Bibliophile with a Deciphring Eye, but I was expecting an arrange of it to appear in Giji Kazoku, or at least to be arranged soon, especially after the last events on Forbidden Scrollery. Enjoyment of the original whatever aside, the XFD mindblowned me and I was overly excited for this one. Now it’s my second favourite track! It starts the album with a piano intro which quite reminded me of Mittsu Kazoero from Nouzui (but it’s nothing alike) and it’s overall a very powerful opening.

2. Mizuiro Hanabi
Those who also care about compilation tracks might see this one as an “upgraded” version of Tanoshii Sensou no Uta, track in the Touhou Party Box 3. Oh, and no one cares about non-Magus Night themes from Fairy Wars. It’s a typical Comp song and sounds so fun!

3. Sawareru Yume
After FREAKS, Paradise Lost and that German titled album, I thought BUTAOTOME were pretty much done with Hifuu for at least this year, and they wouldn’t have made any other song about the secret club unless ZUN popped up with new ideas. Plus, after the huge disappointment the last mentioned album gave to me, I kinda wanted them to stay away from Hifuu for a while. But now the kings of Hifuu arrangements are back to their throne (not that there are other circles who can be considered that). This is my (and Ranko’s) favourite track from the album! The instrumental just brights up my mood, Comp’s bass is always a pleasure to listen and Ranko is just Ranko.

4. Shitataru Shiru
While I don’t like most of Uni Akiyama’s compositions, it’s nice to see arranges of non-Broken Moon stuff. Paprika’s arranges are now a staple element in the last bunch of vocal albums, I guess that’s a consequence for Comp being more busy with the original/major side? And that’s something I noticed you can either love or dislike, at least from discussions with my Piggy friends. Personally, I’m on the first side, though the bear is still the master (and I would love to hear an original vocal track by the cat). Anyway, this is the Papu track in the album that relies more with programming elements. And peaches are tasty, aren’t they?

5. Aoi Miren, Aoi Namida (chillax ver)
Before the full version, which was the most relevant thing about Touhou 16, even more than the new characters? Exactly, Cirno’s comeback as playable character, her tan and the funny memas. I was kinda expecting a new song about her, but instead we got a remake of Aoi Miren, Aoi Namida. The original version is 7 years old, time to feel old. It’s another one of those acoustic remakes with just the piano as base. It could be released on Nostalgia. Cute Ranko is cute.

6. Osanadachi
It was about time for something from Impossible Spell Card, a game that gets so few love in the arrange scene! So few love that this song feels a lot like an original in my mind. Anyway, last Comp track and another typical one from the bear, with also some Ranko x Ranko duets before the refrains. Scott (TC’s live reporter™) also commented how this track would be great to hear live!

7. Nekoism
My favourite Papu track from this album! Starting with a fun piano solo, then MiniPa- ehm, a distorted noise that shifts the mood of the song. Compared with other vocal songs arranged by the cat, this one is probably the most “aggressive” sounding song she ever made.

8. Oisodatsu Aozora
Paprika ends the album with her take on Sanae’s stage, which is good, but not as good as Mirai. Ranko’s sweet tones, gentle piano playing (though it has a shift around the end), just a fitting ending!

Another good album, slightly better than the previous one. Let’s see how this year will end, with Comiket 93 and, moreover, the 2nd major album!

Nekokenban 14
Paprika continues to experiment with genres and this time she delivers to us an old-style/dungeon-esque RPG-themed album. My personal favourite tracks are Mahou no Mori (which shifts between calm Doll Judgment parts with more lively Magus Night ones – imagine to walk in the dark forest and suddenly have random encounters) and Chika Yousai (a quite appropriate final dungeon theme, maybe MiniOrin is the final boss, or the friend we remeet?) While I much prefer the previous two entries of the Nekokenban series, I personally love the turn it took, and I’m eagerly looking forward the theme of the next one.
In the booklet there are also a couple of recipes. They seem to be quite influenced by a manga called “Dungeon Meshi”. I’ve published a translation of them on Nekokenban 14’s page, for your reading and cooking pleasures~ 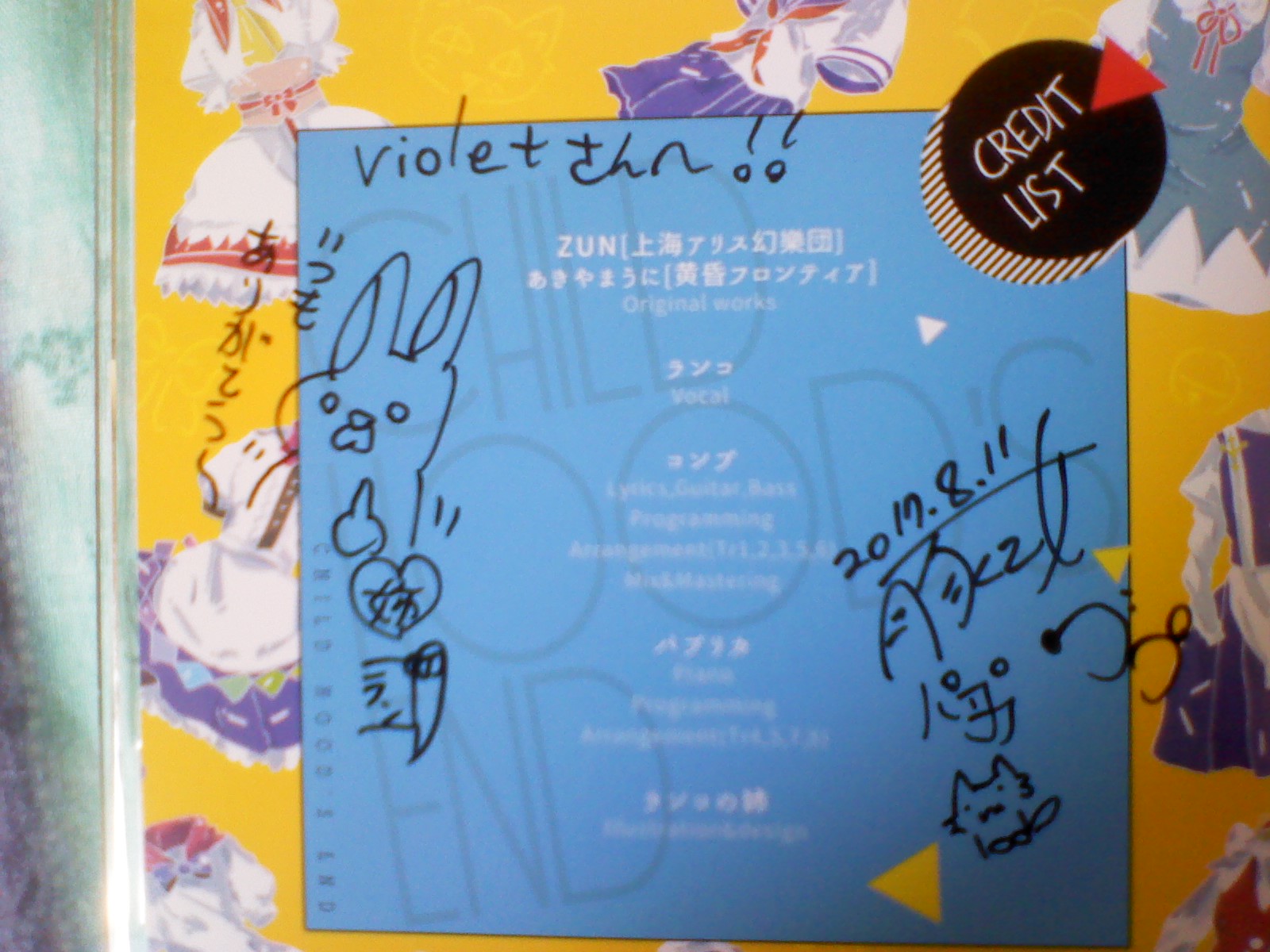