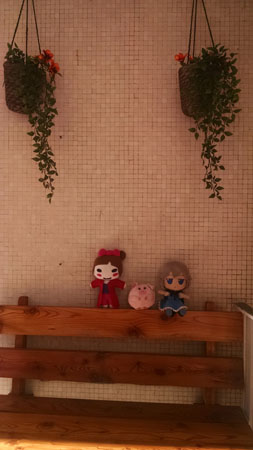 Fall Reitaisai 5 release
A new album is scheduled to be released on October 14, in occasion of Fall Reitaisai! It’s unknown when XFD, tracklist and co. will be revealed, and what it will be. Comp worked on some music in his Butagoya studio. Ranko tweeted “I’ve recorded!!11” a couple of times, but I think one was for the track that will be released on the Uta Matsuri compilation (tracklist for that one is still unannounced). We’ll see…!

Music Game Planet
Surprise surprise, Minna no, the seventh track from 2013’s album Kemonomichi, is now a playable song on Sega’s maimai! The song was played live back in 2014 during a Maimai-related festival, along with other tracks playable in that game or that they would have become in future (Hakanaki Mono Ningen). In that sense, the IN stage 2 arrangement on maimai is less surprising than a non-Mesen song on any rhythm game.
Unlike the majority of songs on maimai, this song doesn’t have any PV, but a Mystia illustration by Riko Oide.
Minna no is also Chibi Ranko’s favourite song, so dedicate a small thought to her if you have the chance to play it! :laughs:

Super Sis’ Art Corner feat. Shimensoka’s goods
– pop’n music’s 20th anniversary
Also, this is a kinda old update I missed, but you can see some goods made by Sis on the official website of the doujin novel circle Shimensoka (scroll a bit after the September 15 update).
Hitohira likes BUTAOTOME’s goods, but also the style the Sis uses for her comics, so he asked her to do some goods: two t-shirts and a mug! The goods will be sold at Shimensoka’s booth at Reitaisai, in limited quantities. More is expected for Kyoto’s Hifuu-only in November!

Any live/event/blabla in the next 7 days?
Comp will lead a talk event at Kamata International Festival this Saturday, with live drawings and improvised performances. Among the other people there are also ZUN, Beatmario and ELEMENTAS. It will be broadcasted live on Nicovideo! Here is the link.
On Monday, BUTAOTOME will play live at the MINAMI WHEEL 2018 in Osaka! Original songs will come back after some months~

tiramise-san goes on holiday!
From Sunday I’ll be on a bit of holiday for a couple of weeks! My boyfriend Scott will visit me. Updates may slow down and I’ll be not really active in the web, but I’ll be able to bring the usual weekly posts!