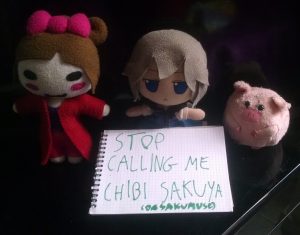 A message from Chibi Muse

As the title says.
From BUTAOTOME’s Twitter activity, we learn that Ranko is addicted to the Fate series, while Paprika is… just Paprika.

It’s Touhou popularity poll in Japan! Ranko voted for Marisa, Yuuka, Mokou, Joon, Reimu, Koishi and Kosuzu for the characters, and Septet, Nuclear Fusion, Old World, Casket of Star, Dark Side of Fate, Candid Friend, Desire Drive, Last Remote and Flower of Japan for the music. The Sis didn’t post her votes, but she made some Shion propaganda (see her art corner below).

Okay, but what about some news related to BUTAOTOME’s music?
The Sis mentioned in the fanclub blog that something will be announced next month. Also, something has been recorded yesterday! Probably a new song for rhythm game/random compilation is coming!

On less bright news, the festival that was announced for March 1st (with Butaotome and some other non-doujin artists) has been cancelled for “various reasons”. The live schedule for this year is currently still empty. However, Ranko will have a solo performance (along with Mai Kotohge from Muon Kagura and Mii from Get in the Ring) at Touhou All Division in Nagoya, on March 16th.

What about you, Violet? What are you doing?
I’m still fixing some post-migration stuff here and there. I’ve restored most of the old songs of the week! Also, here are Kodoku na Hana’s lyrics, the Nemuno song made for Groove Coaster!
See you on Friday with the birthday post for Sis!