And welcome back to the usual review corner!

When Trauma Recorder was available on iTunes (one week before its physical release date), I immediately purchased it. I also bought it on OTOTOY to test that store, but they are still money that go to Buta! However, my reviews need the physical copies: I feel they are a necessary part of my articles, plus there is the extra dvd!
I asked my friend Scott in Japan to buy my copy, in order to get some shop extras, since he would have purchased both versions. But we are not here for talking about freebies, except that the Toranoana badge looks cool and I’m satisfied with my pull of cards (Chess, Folie à deux, Trauma Recorder ❤). 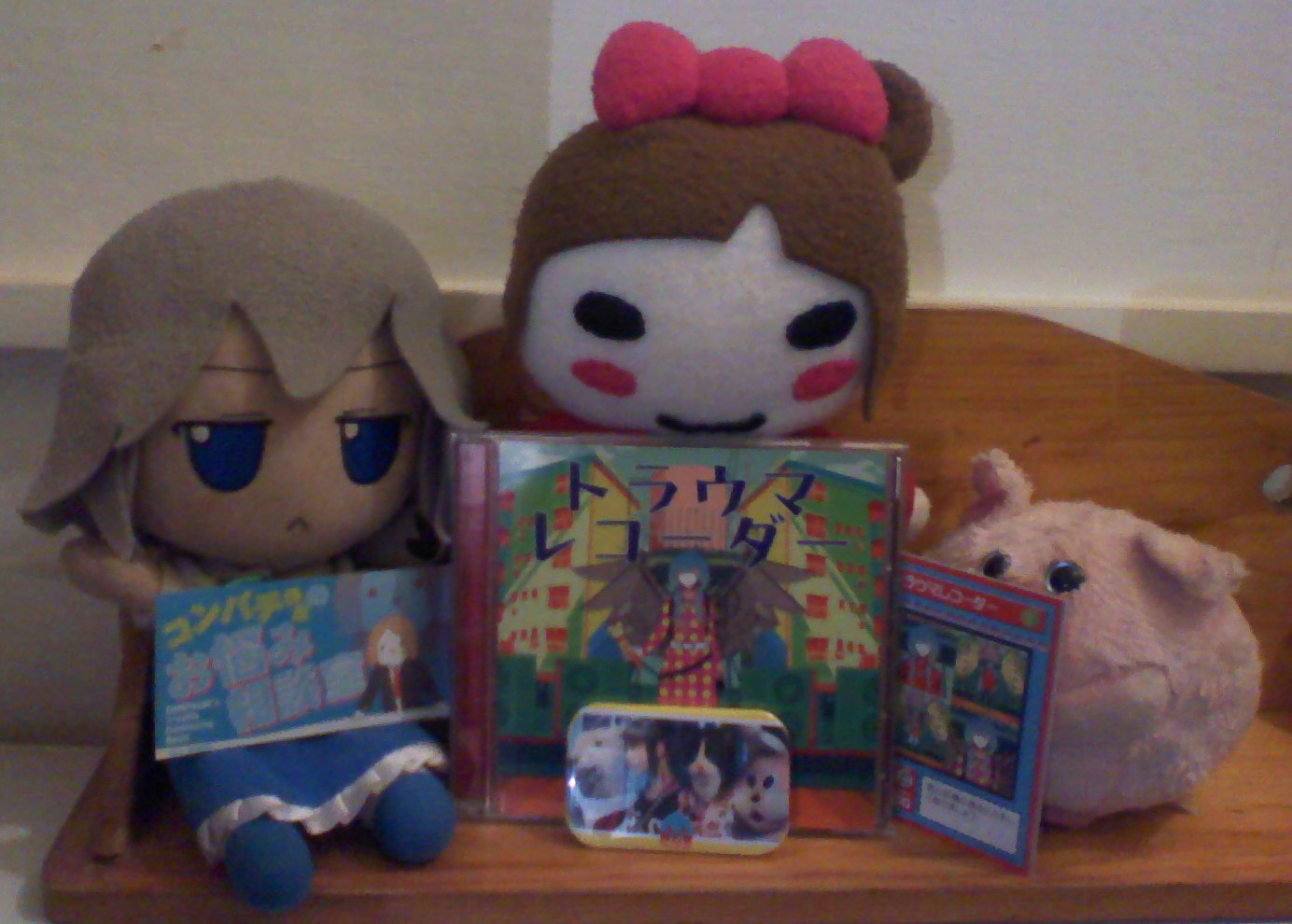 Once again we have two versions: CD and CD+DVD, with a different girl for each cover. This time I love both versions, the regular one with the fish slighly more, though I didn’t spot any easter egg!
Booklet-wise, this is one of my favourites in the original side! No random cows this time, but I love the green tones mixed with the red details of an elevator, and the title cards with the paper clip. I associate BUTAOTOME’s original songs to a city-like setting and I think this booklet quite suits them!

1. Trauma Recorder
An acoustic intro and then it blasts off with a typical sounding track.
I don’t think it has the “lead track vibe”, unlike its predecessor Furubokko, but it still sounds great! MV talks will be saved for later.

2. Ikiru no ga Heta na dake
I consider it to be the other key track of the album, with its phrase being reported in the obi. For some reasons I also think this was going to be the actual titular track, but could you imagine an original album with such long title?! Anyway, a catchy piece supported by a wonderfully crazy bassline!

3. Zurezure na Hibi
And here we have one of the two ballads, this one is of the melanchonic and sweeter-sounding type. Comp tweeted that this song was inspired by a manga named Getsuyoubi no Tomodachi (monday friends). There are not many informations about it in English, but it seems to be a story about growing up, with a girl who meets a strange boy and they meet every Monday night at the school yard. I’ll give it a read if it will ever get an English release!

4. Fusoku Hokou
The ballads continue, but this one is of the heart-wrenching type, with Ranko’s voice at her best. It’s my favourite track of the album and also one of my favourite BUTAOTOME ballads ever, almost on par with Waizatsu Ideology.

6. Panorama
First of all, did you expect another re-recorded track from Bowling? Me not, I expected Circus or something else from Chess, but I guess it’s for next year. Though, Panorama was foreshadowed by recent live performances, being the only Bowling track (obviously excluding Sharekoube) to be played… Anyway, the song was never been one of my favourites, though it grew on me also thanks to its live acoustic versions. Here it’s just a re-recorded version: it doesn’t add anything to the “doujin” version, it has just an improved quality!

To some extents, I see this album as a continuation of Furubokko, but to others not: I think this album is actually on par with the five albums of the doujin era. And even though it “only” has six tracks, it’s perfect in this way. It’s in my top 3 of BUTAOTOME’s original releases and without a doubt my favourite release of this year (even though we are only missing the C93 album).

Now, time to talk about the DVD!

1. Trauma Recorder’s music video
The basic idea is similar to the one from Furubokko’s video, but more elaborated: we still have a lonely girl (this time interpreted by Akane Suzuki, a Miss iD finalist) and the band playing. This time the setting is an arcade station, where the girl went to, maybe to isolate herself from her problems. I guess she run away from home: she gets a call from her mother, which she ignores. During the second half, she also has fun playing a game against herself, in a mirror match that maybe represents an internal conflict. After that, she realizes there was no one at the other side, she goes to play Furubokko on Groove Coaster and the video ends with her replying to her mum’s call and exiting the arcade.
The shots where Akane is pretty much bored/sleeps and there is a Buta member next to her are also quite cool imho: it feels like they are telling her “we are here”. Also, Sis’ dancing is more majestic than usual. And I’m expecting Trauma Recorder to be playable on Groove Coaster sooner or later.

2. MV off shots
Nothing to say, it’s once again a typical “making of song’s videoclip” video, you can see more game center settings. Oh, this time it’s subbed in JP for those who need the transcribed script!

3. Short short movie collection
Yet another collection of short clips with the 3 animals doing random things. Some of my personal favs:
– Pap and Sis on paddle boats. Exclusively because you can hear a child’s voice in background saying “Usagi-saaaaan” and “Neko-saaaan”. (mr. bunny and mr. cat)
– Comp sits on a rubber ball. Then Paprika comes and kicks it, making him fall. Because she is evil.
– Sis trying to do some vanishing magic trick to Pap. Then the bunny kills her with a toy knife.
– Comp declairing his love for us in a park at night.
– Pap and Sis playing a game with wooden puppets fighting. The cat costantly loses, so she ragesweeps it (the sequel of the crocodile video on Furubokko’s DVD).

That’s all for this album, now time to talk about some other stuff!

Piano to Uta versions
All the tracks from Tasogare Elegy and En have been remade with an instrumental piano base and Ranko’s vocals from the 2010 songs copypasted on it. Now, if you saw my package pic I posted on Twitter, you probably have noticed that I didn’t buy those albums, and got a couple of Nekokenbans instead, also thanks to the Melonbooks card promotion. It’s because I’m not a fan of their concept: I managed to listen them thanks to Scott and while some of these tracks sound good and I love the piano base (Aware na Minashigo, Hourai no Sora), overall the piano base doesn’t suit the vocal part. Kage Renbo is probably the best track… and that was already an acoustic song. I was fine with the Furubokkoru tour discs because they were free and cheap-looking, but this idea carried over full albums… nope. I prefer to have proper piano instrumental versions (Neko no Anmin 2 when?) or entirely re-recorded tracks (like the Nostalgia versions of Machibito and GenSate), but I guess Ranko is busier nowadays, so she can’t record a lot of stuff and Comp and Pap can only do what they can do, I could understand most of the reasons.
However, I appreciate the idea of making something to accompany the album’s reprint and I hope they’ll make something cool when/if Itanshinmon will be reprinted.

BEMANI ROCK FES’16 Blu-ray
Surprise! Scott got this because we can’t have enough BUTAOTOME live footage. And when one of the songs included is Radical Shoujo, it’s impossible to say no.
This is the special edition from Konami Style’s shop, so it comes with two discs: a blu-ray with the whole gig and a DVD with backstage footage.
Since this is a BUTAOTOME website, this review will only talk about their performance and related things.

BUTAOTOME played 3 songs: Machibito wa Kozu., Kakera and Radical Shoujo. Machibito and Radical were in their full versions, while Kakera was in its short/Gitadora cut. First of all, being a blu-ray, the quality is HIGH, OMG THE DETAILS. Plus, it’s one of the rare times that there are not backing tracks for guitar/drums, but actual random obscure people playing them. It’s a great performance that also made me appreciate Kakera much more (I don’t dislike the song itself, I much way prefer all the other music game-exclusive songs). I recommend it to those who can’t have enough live footages or also those who can’t wait for a second BUTAOTOME live DVD or Blu-ray!
Also, at the very end of the live there was a premium encore with all the vocalists from the live singing Kakoinaki yo wa Ichi- EEEHM, the famous Bemani song Rin to shite Saku Hana no Gotoku.
By the way, before the Pig performance there was Akhuta: the Bemani composer who made Zero, a song with Ranko for Reflec Beat (and probably my favourite Ranko non-Buta song to date). Even though that song didn’t exist at the time of this live, when I realized he was Akhuta, I admited I screamed “OMG PLAY ZERO PLEASE”.
In the second disc there are backstage footage. There are some rehearsal from before the live (we can see Machibito), then talks with the artists and behind the scenes footage. Apparently the red jacket Ranko used to wear during lives (also known as “her chibi self’s outfit”) (she now mostly uses it for Touhou-only shows) makes her more composed. And she is friend with Mayumi “totally-not-senya” Morinaga!

And that’s all for this post. This is techinically the last “big” post for 2017 from this site, excluding the end-of-the-year post and some live stats I’ll publish during the second half of the month! I have a bunch of ideas in the oven, but I want to bring them to you at my pace and for next year.