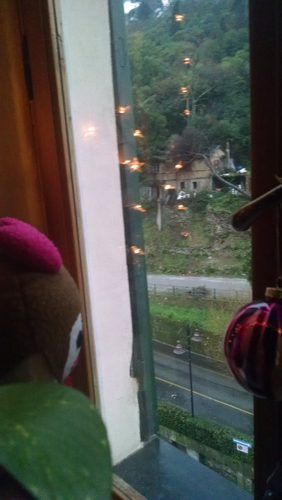 TC Crew Theater 75. I wanted to take a different picture for once!

C95 things
The new BUTAOTOME albums will be revealed tomorrow at 20:00 JST, with XFD, event-limited goodies and everything! However, Toranoana posted the tracklists already. You can read them here, if you are curious. Also, here is the C95 guest list!

The Pig goes outside Japan
Last weekend Comp was in Shanghai, for selling albums at the Comicup event. Meanwhile Paprika was in South Korea, again because yes. The sisters remained in Japan, but Ranko said she really wants to go to Italy in one of her solo livestreams.

Music Game Planet
In case you are a Groove Coaster for Steam player and you don’t know how to spend Christmas, two BUTAOTOME songs are coming next week, as part of two Touhou DLC packs: Konohazuku and Kyouen! Each one of them can be bought separately, or together with 3 other Touhou songs in a bundle.

Meanwhile, if you are a lucky Chunithm player, Kaze ni Noseta Negai will get a WORLD’S END chart tomorrow!

Any live/event/blabla in the next 7 days?
Ranko will be one of the special guests at Hotaru Murasaki’s birthday party on Sunday! Those who will buy a drink will also get a special badge among a set of nine, featuring the special guests.

Now, time to go back into the moving in a new server stuff…