I promised it a month ago, and finally is here! Why I delayed it so much? Well, you’ll read it in the extra section.

I remember I always really wanted an omnibus disc with all the compilation tracks, or at least some of these to be recycled in random albums: I don’t care about the majority of those CDs except for Buta’s track and I have this unofficial album in my music library named “Random Tracks” (oh, and what about Diverse System’s albums and Lieblings Tracks, which were full of electronic songs and the Pig song was the odd one out?). Also, some tracks seem to be quite popular. Said this, the first announcement of this album was a complete blessing for me.

I originally ordered Omatome alongside the fanbook (otherwise I would have purchased it with the Reitaisai stuff). But the 1st February (the day after Daikyuushuusai) I received an email about my package, with only Omatome, being shipped. WTF. But well, I didn’t spent any additional money, so that was fine! 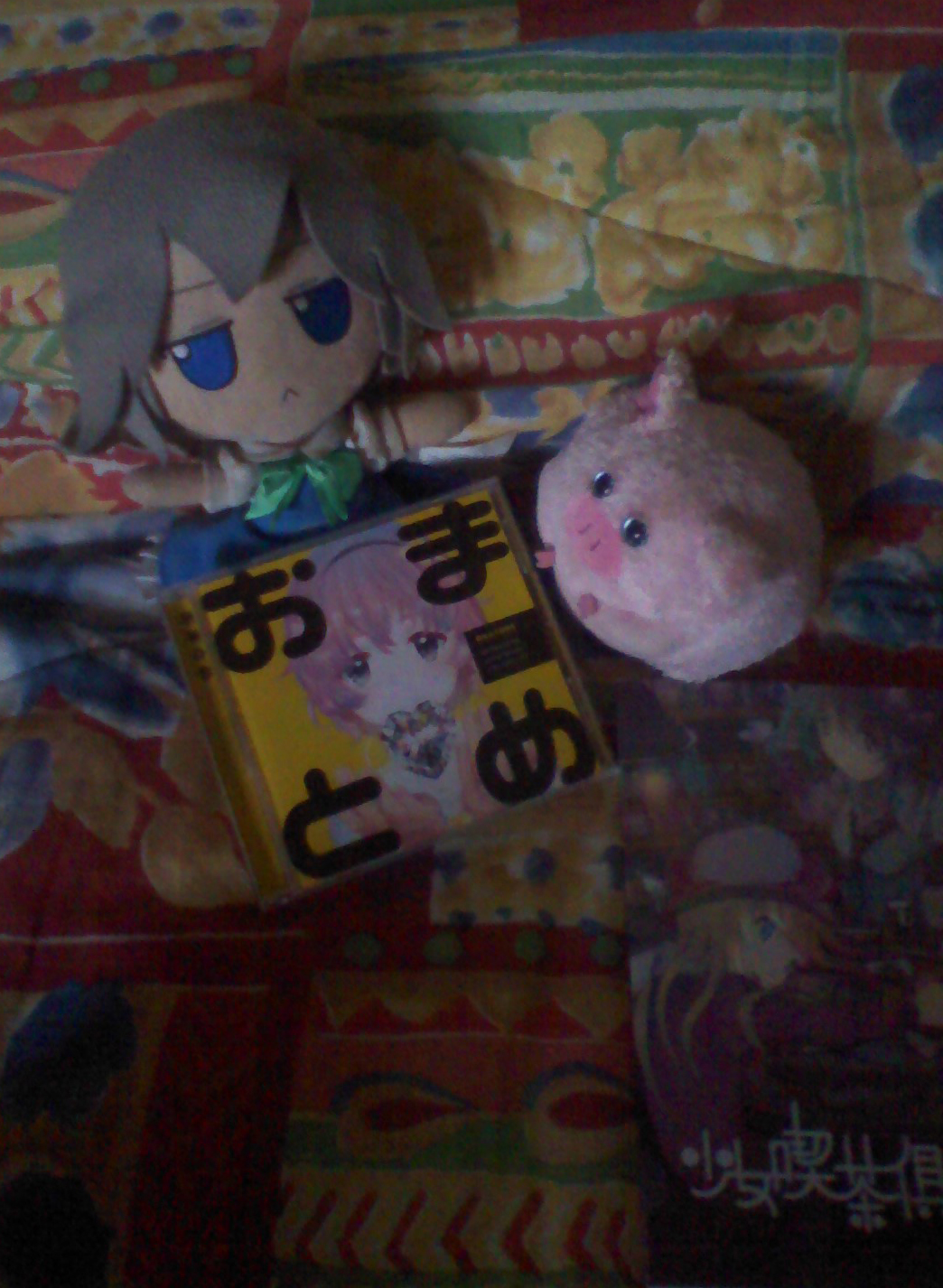 The CD is nothing special design-wise, but the cover is cute. YELLOW everywhere but it doesn’t tire the eye!

Music time! Since I listened the majority of these songs when they were released in their respective compilation, this album is really nostalgic for me (probably even more than a best of).

1. Gikunshi no akuchi
I remember I way preferred this song and the following one over the entirety of Jitsuwa long title is long. If you often listen to Toranoana and co. compilations, you probably got in a similar situation at least once. Anyway, the album opens with a fairly ordinary track from their 2012-era where Comp’s style was a bit stagnant, but I still quite like it.
Oh, this song has a Beatmario version on th3.5. I can only say: :HORRIBLE SCREAM:

2. GURA・GURA
All the Area-Zero tracks have a peculiarity: they are made for a fighting game, therefore they must have a certain strength. And Buta delivers it! This song is a Wonderful Heaven arrange: I like the original theme, so I like this one.

3. Konpeitou
And after badass Ranko… kawaii Ranko. A cuuuuuuute Mokou x Keine song, in contrast with Tsuki wo kogashite (their other song about the same pairing). I like to pair these tracks like day and night, sun and moon…

4. Ima narabe
Angry Ranko is angry. I’m personally not a fan of the sudden intro, but I love the rest of the song. I love 3rd eye, so for me it was always difficult to say if I prefer more this one or The fear is oneself, because they have their differences. And because “there is no 2 without 3”, now there is also Shuushin and the dilemma (mitame wa no reaction, kokoro wa actio- ok, sorry) is bigger.

5. Akai hitomi
Ooooh, I’m really affectioned to this song. I remember I purchased ExEientei’s Hyakuotogo for it. And when I ripped the album, I directly selected this track. And I thought it was the wrong one. Then the drums/bass came out and Ranko started singing. It’s a song for a horror-themed compilation, so it has this eerie feeling. I love the I-don’t-know-how-it’s-named-that-instrument-I’m-ignorant parts. And the piano at the end, omg.

6. Kogane no itami
Golden pain -> money are gold -> Itami Honpo confirmed!!111 Ok, joking. I think this is the most recent track… Comp x synths my OTP, a good Chinese Tea arrange! Malus points for having copypasted the misprint from Lieblings Tracks.

7. Inori wo komete
Oh, this track exists. I don’t know why this one always fell in the forgettable category for me, despite not being a bad song at all. Probably because they always had better mellow songs? Oh, and then Bystander came and blown this one away 🙁

8. Douin
Oooooh, I love this one. Apparently it’s also Sis’s favourite track from this compilation! Plastic Mind is probably the most underrated Alice theme, and Buta’s arrange is a melanchonic song. It would have been a good closing track for a regular album :heart:

9. U・R・A
Read what I have wrote for GURA GURA. But maybe I prefer this one, despite not being an huge fan of Wind God Girl. It just sounds more powerful!

10. Kireba wakaru
Area-Zero track again, but this one and MOBU are different than URA/GURA GURA. They are more new/“fresh” sounding. This one is my favourite of its little group. I love Ancient Temple, but I way prefer this arrange over Kireta Ito.

11. Kyoukaisen no protocol
Hibu Club’s theme song The other missing Hifuu song. I have a special spot for this one: not just because Buta + Hifuu is an instant win for me, but I listened to it back to the times I was new with them (first half of 2012) and I noticed they had a bunch of Hifuu arranges. It opens with an orchestral-ish intro and then it follows the regular style of that time. I think the lyrics also follow a certain part of the novel Yumeutsutsu by Shimensoka or its sequel, which was released along with the album Genmu.

12. Seijaku na yoru
A track I often overlooked because I really don’t like the SakuAli pairing. Stupid reasons are stupid. Because it’s actually a really good track. But nothing too much to say… On that SakuAli anthology there was also a Sis illustration: Alice in Wonderland-ish with Sakuya as White Rabbit w

13. MOBU
Area-Zero, blablabla, I know, powerful, ecc.! And I feel sorry for commenting it like this ^^“

Overall… I think in this album is possible to see Comp’s style evolution. There is also a certain improvement of sound quality (or it’s just me?). Nothing to say about Ranko’s vocals: she always sounded good and she is still awesome!
This kind of tracks (not just those selected for this album) are mostly regular Buta and I can’t pretend too much, but there are some gems here and there. Now I’m waiting for Omatome 2 with the Toranoana tracks (maybe for Autumnal Reitaisai?) :tea:

BONUS
Ranko no Ane’s illustration on Shoujo Kissa Club.
I’ll dedicate the bonus section of every review to guest participations I find worth to talk about and/or I have the source!
This is an Hifuu cafe-themed anthology released some years ago. It’s out of stock, but I managed to get an used-like-new copy. The Sis contribuited with an illustration of Renko managing a cafè (and Merry being a customer). It’s a nice illustration, but I way preferred the cute little RenMerry in the afterword :°D.