With a new Shoujo Rengoku being in the work and coming next month, I want to talk about the 3 previously released albums. I’ll analyze the style and the evolution of the series. Sadly, there won’t be detailed track-by-tracks, unlike my typical album reviews. Otherwise the article will be published after Shoujo Rengoku 5. :laughs: 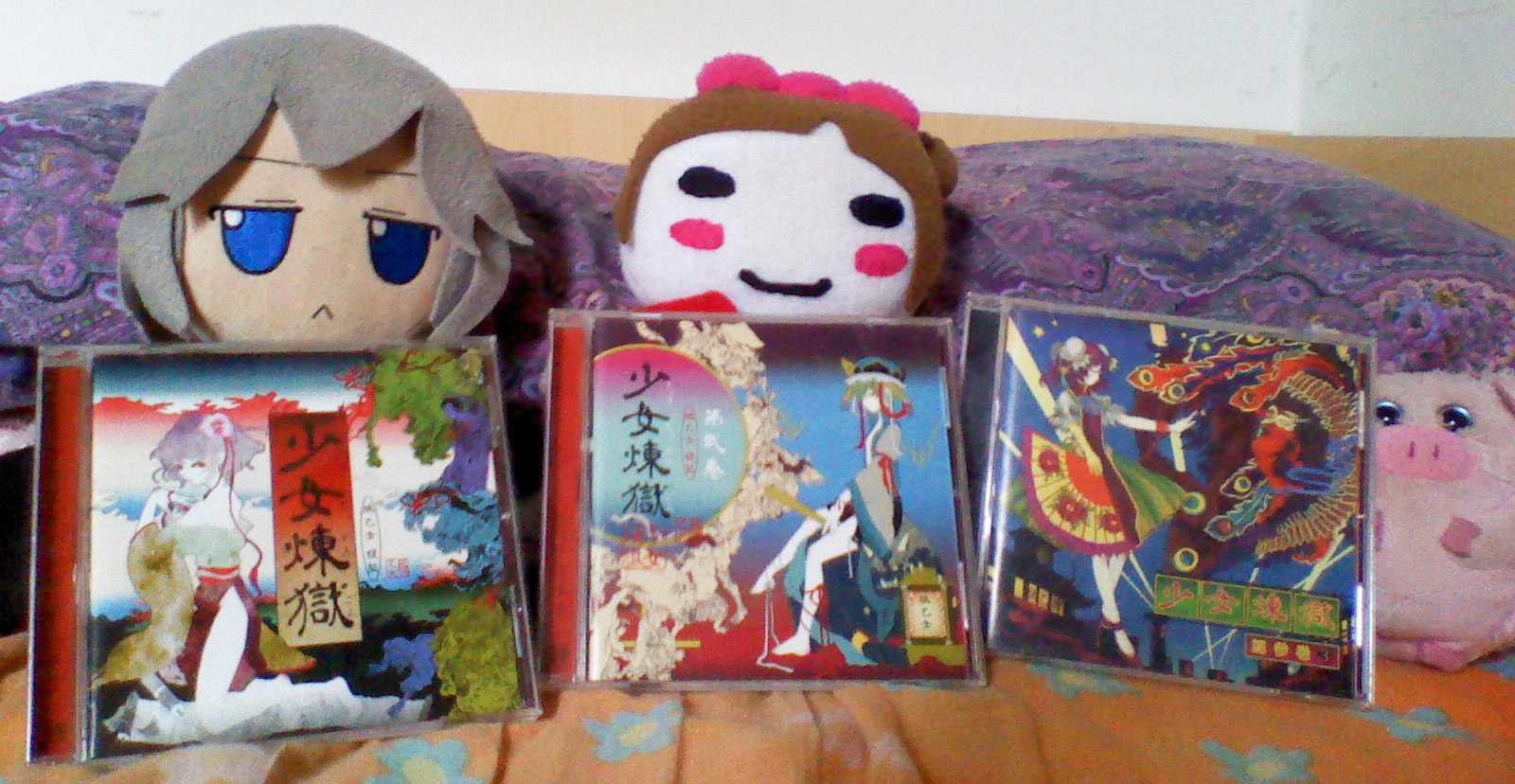 The first Shoujo Rengoku came in the summer of 2013. I still remember the hype train I was riding while watching the Sis livestreaming the works, as the artworks were very different from anything she made before!
Every Touhou vocal album has its own theme, and for this one is something like “Japanese style” and “youkai”. This type of album is kinda popular, especially for original circles. We see the Touhou characters mostly wearing kimono or quite revealing outfits, drawn in a style quite reminiscenting of the Ukiyo-e genre. The album arts are garnished with youkai drawnings. The chosen girls for each song are pretty much youkai (Kokoro is a menreiki, Sekibanki is a nukekubi/rokurokubi, etc.) or humans that could easily be adapted in an old Japanese setting without altering their background (Reimu is a shrine maiden, Akyuu is based on Hieda no Are, etc.). Musically-wise, it’s full of Japanese-styled melodies and instruments, especially notable in songs like Omokakushi, Meguru Gou and Kettou, and they meld with the usual BUTAOTOME taste, there is overall a quite eerie mood.
The “key” tracks, if the ButaBest selection is anything to go by, are Hakanaki Mono Ningen and Towa no Maigo, the first being a typical rock single and the second an evil-sounding piece supported by the accordion.

A year passed, and surprise! Another Shoujo Rengoku, the first (and only) time ever a BUTAOTOME album got a named sequel. where is my ichinichi 2 A thing I never realized before making this article is that while the arts in the whole Rengoku series look the same, the coloring method is kinda different. The girls in the first Rengoku were colored with a very dirty watercolored effect, while in this one they are more vivid. Shoujo Rengoku 2 just continues to where the first album left us, adding more characters to the purgatory. It especially focuses on the oni and the Ten Desires main trio, who are based on Prince Shoutoku and the Soga and Mononobe clans. Regarding the music, there are similar stylistic choices, which can be told from tracks like Gedou no Sakazuki, Michi or Tsumi no Katamarri, but I feel this one has a slighty brighter mood than its predecessor.

Another year passed and we got the 3rd Shoujo Rengoku. Which was a departure from the first two. Official sources say that it has a “Chinese style”. The Japanese fonts are normal and readable (thanks god), the coloration is much more polished and the outfits of the featured girls look less elaborated and more similar to the official ones. The youkai arts give their place to a sort of city setting, visible in the cover and back arts. Plus the symbol in the spine is different, while Rengoku 1 and 2 had the same one. We could say this chapter is a mixture of traditional and modern, and that could be told by the character/theme choices and the music. I mean, how a simple psychic girl from our age is supposed to be related to the world we analyzed? And this mixture is presented also in the music: it’s one of the BUTAOTOME albums with the most variety of styles in the songs. I think the fact that most of the tracks come from Urban Legend in Limbo (the newest full Touhou released at the time) might served as influence: aren’t monsters in urban myths a sort of modern day youkai?
Talking about the selected “best” tracks, we have Futatsu no Cinema and Hana: the first is a “dark circus” track, the second is a rock tune with a mix of programming elements and traditional Japanese instruments. It might be one of the best tracks to describe this album, but I always found its placement in the third ButaBest to be a bit weird and I think Nawatobi, which could be best defined as “Comp trying to do a Paprika-esque track”, or the insanely popular Utakata, which best emphatizes the “chinese feel” of the album, would have been better picks.

I think at this point everybody expected the Shoujo Rengoku albums to be a costant for summer Comikets. But then we got FREAKS in 2016 and CHILD HOOD’S END in 2017. With the release of Ayakashi Yokochou, an album with some echoes from the Rengoku series, I thought the youkai series has been abandoned. And then, suddenly this year, the announcement directly from the circle cut in the summer Comiket catalogue: a new album of the Shoujo Rengoku series will be released. What we know so far is that the Sis posted some artworks of Eternity, Medicine, Narumi and Nue on her social networks, so we should expect arrangements of themes related to them (inb4 an Amanerioless version of Chiguhagu na Sekai from Touhou Peace, Iyaiya from the first Touhou Party Box, a Ranko version of Karento’s Starlight Trip -which is arranged by Paprika- and… nothing because this would be the first Narumi song lol. Or, even worse, the Sis is insanely trolling us and the arts are just a red herring). And as I said multiple times, I think Oni-san Kochira will be re-released, and it would fit as intro!
Anyway, judging solely from the art, I think the upcoming disc will follow the style of the first two albums: the coloring is in continuity with them, Eternity and Medicine are wearing kimono instead of their typical attires (Narumi on the other hand has the same exact outfit, while Nue is fused with the chimera elements of her namesake creature) and the almost-unreadable Japanese fonts are back. But for now we can only wait!

With this, I could say that Ayakashi Yokochou was an album made to follow the style of the 3rd Rengoku: they are both albums with a large variety of styles, most of the character/theme choices can easily fit the classic Japanese setting and the back covers are in the same style, with cool panels with each song’s title and staff name. Plus, you might find the alley from the album title in the city of the cover of SR3 :laughs:

Aaaand this is all for this post! Perhaps this is just my personal interpretation of the Rengoku series, but isn’t art meant to be open ended?