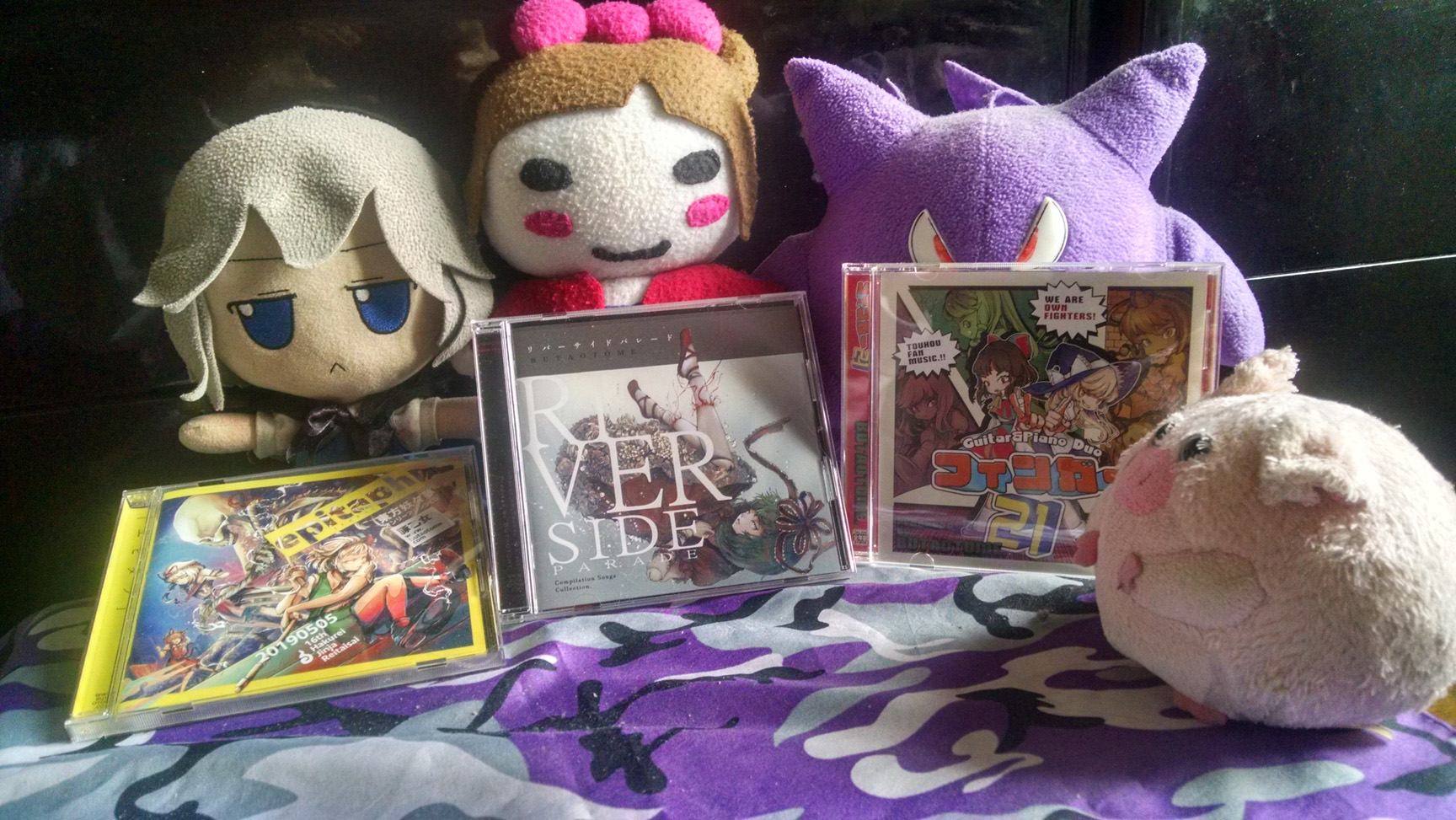 And here we are, with the usual review corner! We have 3 new albums and two guest tracks, let’s take a look on all of them!

BUTAOTOME’s main release for this Reitaisai is yet another album based on a single Touhou game, and with a title that wouldn’t sound out of place in a Sally release. This time there are exclusively arrangements of Touhou 7 Perfect Cherry Blossom, one of the most popular games of the series.

If you remember my previous review, you already know that I said that I was unsatisfied by the last bunch of Touhou albums. More specifically, those with new vocal material (so Nekokenban and re-arrange albums are safe from this) released from C94 onwards. Shoujo Rengoku 4 and Daifugou felt rushed, and Daifugou was very disappointing when compared with its “twin” Daihinmin (BUTAOTOME’s best 2018 release). Then we got Abyss. I’m not a fan of albums that revolve around a single mainline Touhou game, unless they are from circles who know how to do them. And Abyss was an example of how not to do it, as it lacked of both variety and cohesion, and had just a couple of great tracks.

I hoped Abyss was just a one-off, and that they would have come back to do random themes as usual, with some more original concepts. Maybe a UFO 10th anniversary album later in the year. But then, Epitaph was revealed. Unlike last time, I really like the source game and I was looking forward to hearing some of the themes without any BUTAOTOME vocals, as well some better takes on very old ones (Letty’s theme, for example). But when I listened to the XFD, my mind was between “hey, this is not that bad” and “omg, this is just Abyss v2”. I was conflicted about it. Then, to my surprise, Haru no Yuki was played during the Niconico Choukaigi. And it destroyed my hype. The track that Ranko said was her favourite, the one they chose to promote their newest release… was actually a clone of Solid, with just some high notes from Ranko.

Now that I have the album in my hands, is it really that bad? Let’s see! Starting with the design. While we have some nice artworks of Youmu, Yukari, Chen and a skeleton, the rest is…. just not good. There is yellow almost everywhere, which is the last color I would choose to represent Perfect Cherry Blossom. The writings on the cover feel like an attempt to fill the cover with unnecessary stuff, and even the booklet reminds us of the album title on every page, for some reason.

Now it’s time to talk about the music, but first I want to get the bad stuff out of the way and mention the tracks I think are the worst in this album: 3, 6 and 8. I’ve already talked about Haru no Yuki in the intro of the post, so I won’t waste any more words on it. Momoiro Fivestar removes every trace of beauty from PCB’s stage 4 and transforms it into a generic piece (not what I was hoping for one of the most awaited older original themes). Neko to Shakushi had potential, but then it devolves into a plain Ancient Temple arrange without many differences from Kireta Ito and Kireba Wakaru.

Now, let’s write some positive words! Ego is the best track arranged by Comp in this album. Once again, the title screen one, but it rightfully opens the CD! As a base dish of typical Comp-ness, it adds some very interesting sound, mixed with a pinch of melancholy and Ranko’s vocals at top of her form. Ichigon Houon is upbeat and happy-sounding. Kiriri is the always accepted ballad.

Once again, Paprika arranged only two tracks. Sadly, none of these are a Chen song with lyrics about putting funny hats on cats and other forms of torture. Taresagaru Kokoro is a nice jazzy piece, but then we have Shiroi Asa, the best track by far. A great ballad that doesn’t even sound like a typical Pap song, and that arranges the hyper-overused Necro-Fantasia in a good way and without its generic refrain. Even my boyfriend, who typically dislikes Paprika’s songs, admitted this is the second-best track in the album. Shiroi Asa alone is worth the entirety of Epitaph!

Overall, this is an okay album with its great moments. It’s slightly better than Abyss, but it still lacks something. If you are a fan of Perfect Cherry Blossom’s music, you can give Epitaph a chance, but I think there are much better PCB albums out there.

Now I know I will sound kinda selfish, but my hope for BUTAOTOME’s future releases is that they would stop making albums based on a single mainline Touhou game. I miss the concepts they were coming up with, and even when they were “trivial”, there was always something interesting. But most importantly, I wish they could stop giving so much attention to Touhou, with so many Touhou-only lives and releases. Though, I’m aware that original stuff requires much more time to being produce.
I don’t want to see them devolving right when they are celebrating their 10th anniversary.

The second release of this Reitaisai is an album with a gorgeous Hina artwork that collects all the tracks from the Touhou Party Box series. Well…. only the entirely new songs, because we are still missing the remixes of Daruma-san ga Koronda and Rougetsu. But hey, we finally have tracks from compilations every other circle and their mother are re-releasing somehow, so we shouldn’t complain!

I think this is an album that should be treated more as a collection of songs than an actual album. Understandable, since the songs were made in different periods of time and for a “generic” type of compilation. Pretty much all the tracks are typical Comp songs and they are all good songs (except the Septette arrange). But I also think that most of the original themes got better takes in other BUTAOTOME’s releases. My personal favourites are Iyaiya (with some vocal effects that remind of poison) and Yokubou no Kodzuchi and its \HEY/. I recommend this CD to hardcore Piggys who want to complete their BUTAOTOME Music Library and don’t want to buy giant compilations of 40 tracks but they only care about one or two. Avoid it if you are Team Paprika :laughs:

Now, I hope the Pig will be able to re-release some more guest tracks! But most importantly… Where is my original OtoGee Best?

As the third release, we have an instrumental album, where Paprika and Zyukucho (COOL&CREATE’s guitarist) arrange the themes of Touhou’s playable characters together.

I know some people might be turned off by the fact Zyukucho is the guitarist of Mister Unkoman’s circle. But don’t let it get to you, because he is quite talented (he also has his own series of instrumental albums, if you are interested). Ah, and he arranged the best track from Touhou Peace, so it’s something!

This is basically a Nekokenban album with guitar, and it’s the most interesting one of the three new releases. Half of the album is arranged by Zyukucho, the other half by Paprika, but they play their signature instruments in each track. Zyukucho’s acoustic guitar adds a Spanish touch to the music, especially in the tracks arranged by him, giving a nice contrast with Paprika’s jazzy piano in a wonderful battle!

I highly recommend this album to fans of the Nekokenban series!

A track from TsuBaKi’s Every Missing Mystic Mxxxxxx, with Ranko’s vocals. I’m a fan of TsuBaKi’s works and I own a couple of albums from them. I was already excited for this album back when they revealed the cover, but try to imagine my reaction when I listened to the XFD and I heard Ranko’s voice!
This song is a Violet Detector-based one, and I suppose the two vocalists take the role of the two Sumirekos. The instrumental and rockish base by Jiangwuluanwan provides a dark setting to the track, and Ranko and Yuki Ayatsuji work quite well together. It’s one of the better Ranko duets!

A track from COOL&CREATE’s Heisei Saigo no Bokura no Ochinpo, composed by Comp and sung by Mister Chinpoman Beatmario.
As a track where they sing about penises, you need to turn off your brain to enjoy it, but it’s worth a listen alone for Comp’s glorious growling. Can we now have a proper BUTAOTOME song where he screams?! Black Sunflower is too old. It’s a welcome addition to the BUTAOTOME Meme Playlist. It’s also one of the best tracks in COOL&CREATE’s Ochinpo album. Because yeah. I listened that entire album.