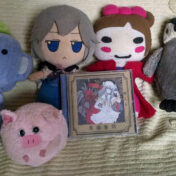 First of all, Reitaisai, which was originally planned for March 22, has been postponed. But this won’t stop circles to sell their albums on BOOTH or other shops on the original day of the convention! Comp announced that the preorders for the new BUTAOTOME releases (well, actually one new thing and an old one) will start tomorrow! However, the releases… Read more »

From the livestream of 11th February 2015. Today’s streaming… they had a lot of problems, so they started after 40 minutes. They only did Comu, the piano corner (without poll for next week) and the Kimi no, but it was more humourous than usual (I might upload the entire streamo tomorrow) wwwwww Title: 罪と罰 Romaji: Tsumi to batsu Translation: Crime… Read more »