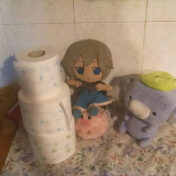 Last night I dreamed about the setlist. It wasn’t very interesting, most of the songs were the same as the Black live, Haru no Yuki was there. Was this a vision from the future? (spoiler: yes)

This was the 3rd two man live for celebrating BUTAOTOME’s 10th anniversary. Too much focus on Touhou songs, no cover of a TaNaBaTa track, no Goku songs but Epitaph songs are still surviving because we don’t know. At least there are Anata ni wa Miete and Zurezure na Hibi. 1. Gensou no Satellite2. Haruka Tooi Sora no Koe3. Hakanaki Mono… Read more »

It just ended! This was the second one of the 3 two man lives for BUTAOTOME’s 10th anniversary. Thanks to Ark Lucifead for providing the setlist as usual! Once again, a setlist too much focused on Touhou songs, but this time we got a cover of a Sekkenya track (and Sekken covered Furubokko during their part!) and another live debut… Read more »

And let’s start this new season of lives!! A couple of Ayakashi Yokochou live debuts and great comebacks! A small note: my friend Scott won’t be at any of the lives of this tour, so no live reports from him. Setlist from the usual: 1. Kasho no Yume 2. Sorairo Ribbon 3. Yodare 4. Good Master 5. Inzen 6. Motelab…. Read more »

Why people are interested on setlists? I think they are a way for hardcore fans to keep an eye to the activity of their favourite artists, outside of the usual “listen the music, analyze it, discuss it, find something to do with their work while still respecting it”. Or for simple curious people, who want to know what to expect… Read more »

All of Trauma Recorder was played and some old tracks returned in setlist! No CHILD HOOD’S END live debuts and we can also see how Furubokko has been already archived. 1. Radical Shoujo 2. The fear is oneself 3. Kyou En 4. Koi no Yamai 5. Y 6. Ikiru no ga Heta na dake 7. Yodare 8. Katte Ninjou 9…. Read more »

A translation of the “How to Livehouse” video, which illustrates some rules and advice to follow when you go to a Japanese live (mainly those in livehouses). 1. Hand luggageIf you bring large luggage to a live concert, it tends to get in the way, so either don’t bring it or leave it in a coin locker near the station…. Read more »