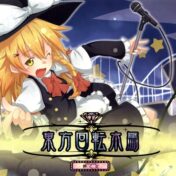 Original post (free) Part of a series of posts where Ane will talk about the albums featured in the Ura Best. Ranko no Ane here.I think I’ll be dropping some production stories from early albums for a while.Please forgive me for the lack of music-related talks.[Touhou Kaiten Mokuba] The copy text on the obi reads, “Nice to meet you, we… Read more »

From the livestream of 21st January 2015. Today there was the last livestream for this year! Though, no piano corner, Kimi no and Compachi, they mainly talked about the C91 releases. I won’t upload anything on Youtube tomorrow, but I’m planning to post something special instead! Anyway, for this week I want to post a performance of the song that… Read more »

Something historical: the very first performance from an Utau Namahousou (7th November 2013)! Today there was also the debut of a new corner where Paprika plays piano versions of the songs requested in a poll. Last week they asked about Touhou Kaiten Mokuba and Machibito wa Kozu was the winner: Papu played it and then they asked about Gensou Homo… Read more »

From the livestream of 29th January 2014 Today’s streaming was a Kimi no Edition, with just the bear and the cat. Meanwhile, all the members are working on the C89 releases! [note: there is a little audio-glitch around 1:37. I couldn’t manage to fix it, sorry :(] Title: マモルベキモノ Romaji: Mamorubeki mono Translation: Something I must protect Original theme: Meiji… Read more »