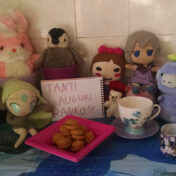 Happy birthday to the wonderful voice of BUTAOTOME! It was around this day, 10 years ago, that I became a BUTAOTOME fan. Or rather, I started as a Ranko fan. I think a lot of people got into BUTAOTOME because they heard Ranko’s voice in some other groups like Sally, Diao ye zong or UNDEAD CORPORATION. However, over time I… Read more »

The first Reitaisai of the Reiwa era is slowly approacching on May 5. A lot of circles already announced what they will bring to the event. BUTAOTOME will finally announce their new album(s?) on Wednesday, during the weekly livestream! Together with this reveal, they will also talk about the 3rd celebratory event for the 10th anniversary. To fill the time… Read more »

M3 has ended and Tanjou is now on sale! The column on the right has been updated as usual. Actually, I’ve created the Tanjou page last week, but I still have to put it in the Discography page because, as I said on Twitter a few days ago, I want to wait for the Comitia release before an update (this… Read more »

Ok, ok. Usually, I prefer to wait few days before the events for making this kind of post. But there are already a lot of announcements and I feel like is a bit stupid to wait until the end (I don’t think we’ll get other guest albums). First of all, a little reminder that BUTAOTOME’s releases will be announced the… Read more »